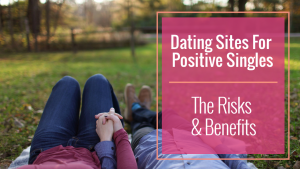 I have learned so much in the last 16 years from my own experience of dating with herpes and supporting women with herpes in my private practice and herpes Pink Tent™ support forum. While I never chose to use a herpes dating site myself, many women out there do and I totally support them in their choice. Let’s review some of the benefits and risks.

1. The Talk:
The most glaringly obvious benefit is that dating on a positive singles site can help to lessen the fear of having The Talk and disclosing your herpes status. Where so many women fall short is that they skip ever having “The Talk” with their new prospective positive partners, especially if both have herpes. They assume that since they both have herpes, that there is no reason to discuss their past medical history. STD’s come in all different forms, and while HSV is the 2nd most common STD, it is not the ONLY ONE. I have coached so many women over the years after they are newly diagnosed with herpes and I always remind them that The Talk is an essential part of staying healthy. In fact, having genital herpes puts you at a greater risk of contracting HIV. The reason for this is that if you have genital herpes, your natural barrier of protection, the skin, might be compromised with small sores or lesions in and around the vagina and cervix that you might not even feel. These openings in the skin are access points to HIV and other STD’s and infections. Know your risks before having sex!

2. Stigma:
Herpes dating sites often give women who are newly diagnosed a chance to meet some really wonderful and normal men and women. So many women with herpes who have been sexually responsible think that they are all alone. The truth is that herpes affects all sorts of women and the stigma of it being “dirty” and “shameful” is totally unfounded. The fact is that herpes affects at least 1 in 4 women and statistically speaking, there is absolutely no way that 1 in 4 women are “dirty”, sexually irresponsible and promiscuous. Dating within the community can often help to build a woman’s self confidence as she gets used to dating with herpes.

3. Honesty:
I recently conversed with a young woman with herpes that had just broken up with her boyfriend. They had been dating for some time and things were really going well. She had had sex with him a few times before she ever got the courage to tell him that she had herpes. Now, this is much more common than you think. So many women with herpes never disclose to their partners until its too late. In this case, the boyfriend was extremely loving and compassionate towards his girlfriend, but the trust he had in her was ruined by her withholding her status and exposing him. Even after talking to his friend with herpes, he just couldn’t get over the betrayal, so he broke things off. She was devastated! The moral of this story is that if you are a woman dating with herpes, you MUST tell your partner before it’s too late. Imagine how he or she would feel if they contracted genital herpes from you and you never disclosed your status! One of the benefits of using herpes dating sites is that you don’t need to worry about rejection because of your status.

4. Getting Too Comfortable:
I can’t tell you how many times I have had women with herpes share with me that the only reason they stayed in a bad relationship was because their partner also had herpes. This seems to happen more frequently with couples who come together on herpes dating sites. Regardless of whether your partner has herpes or not, a woman should never stay in a bad relationship because she doesn’t think she can do any better. Over time, many women start to even forget that they have herpes, until its time to break things off. If the relationship goes bad, women often stick around longer than they should because of the fear of being rejected once again. A herpes dating site and community is of great value to lessen these fears. I coach women to really pay attention as to whether or not their relationships are only based on the fact that both partners find sanctuary in the fact that they both are infected. If so, this is a fateful disaster waiting to happen. It will eat away at one’s soul and rob a woman of her right to be have a happy and healthy relationship.

5. Small Pool of Fish:
If a woman chooses to only date within the herpes community or from herpes dating sites, then she limits herself to the number of potential partners that would otherwise be interested in dating her. This is the main reason why I never used a herpes dating site. I wanted to put my best foot forward and not limit myself to only date men with herpes. Looking back, this was a good choice for me because I met my husband through a mutual friend. Had I not given him the chance because of the fear of rejection, then we would have never come together. While there have been several women who have found their partners from these sites, I have also heard of women who have just given up and stopped dating altogether if they are not successful. All in all, I encourage women with herpes to keep an open mind as to who would and wouldn’t be open to dating them. Dating within the herpes community is a great first step, but I encourage women to get out there in the open pool if things don’t work out in the “small pool”.

6. Transmitting Herpes To A Partner:
For many women, their greatest fear is transmitting the virus to an uninfected partner. The good news is that once a woman discovers she has herpes, she can take the proper precautions to greatly decrease the risk of transmission to her partner. If a woman with herpes is dating within the herpes community, it is important that she understands the transmission of herpes. If two people have the same strain of the virus, for example, if both people have HSV-1 or herpes type 1, then the partners can not pass it back and forth between them. This “compatibility” is the same if both people have HSV-2. However, if one has HSV-1 and the other has HSV-2, then there is some chance of transmission. Having one type does protect you a bit from contracting the other.

For many, dating another person with herpes can remove one’s fear of transmitting the virus and this alone is thought to be a huge benefit to dating within the community. But just remember that if you date someone that you assume does not have herpes, there is always a very good chance that they have it too. Recent studies show that 85% of people who have herpes don’t know it. Get your partners tested! If you would like more information on dating and living with herpes, be sure to check out our FREE, private forum for women supporting women with herpes. Ask questions, get support and get inspired. You’re not alone at Pink Tent™ Forum.

Feeling Overwhelmed? My Course Offers You Everything You Need To Know And A Supportive Community To Help You Get There. Join Us Now!

Feeling Fear, Shame, Or Guilt? Check Our Our "Secrets To Success" Course For All The Info And Support You Need To Reclaim Your Vitality & Joy.